Party is hosted by Mira Sorvino, Nick Loeb and Amy Sacco. The event will be emceed by Olympic Medalist and World Champion Miles Chamley-Watson with a video presentation by The Nerdist Chris Hardwick.

Along with the cast of #Cancerland, Alex Woo, Tish & Snooky of Manic Panic, as well as various other celebrities, are expected to attend. The food will by Mundo at The Paper Factory and the bar will be by The Cup Bearer.

Tickets are available at Eventbrite and there is a companion online auction at Bidding Owl. 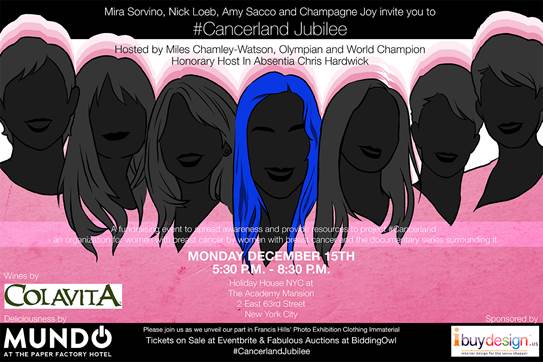 About #Cancerland and Champagne Joy:
#Cancerland is both breast cancer charity and a TV documentary series. It revolves around eight women in the New York / Connecticut area, all of whom battle breast cancer while throwing parties and charity functions, getting kids off to school, and participating in political rallies. Rejecting the notion that illness owns the patient, #Cancerland explores the concept of one’s refusal to be hobbled and that “living well is the best revenge.”

Champagne Joy is the founder of the #Cancerland charity as well as the creator of this documentary TV project. As a terminally ill Stage 4 Metastatic Breast Cancer sufferer, she is determined to make #Cancerland her legacy — a “place” in this world where women can turn for resources, advice and love from fellow women who have the disease and refuse to be defined by it, but insist on redefining it.