Swimmers of all ages participated in the event, swimming a mile or half-mile at the Chappaqua Swim & Tennis Club to support a cause that has directly affected many of them. The fact that many participants had a connection with cancer heightened the importance and value of the event.

According to SAALIS committee member Jean Fufidio, the Chappaqua Swim & Tennis Club’s leg of Swim Across America set a high standard for future events. Although this was the town’s first year participating, it’s likely that Chappaqua will have second highest number of swimmers for the 2012 SAALIS season.

“I think this is a record-breaker, especially for the first time an event is held at a new location,” said Fufidio. Bobby Hackett, a 1976 Olympic Silver Medalist in the 1500 Meter Freestyle, attended and hosted a swim clinic for the younger participants.

“I’m going to teach them swimming techniques–based on the fact that just being big and strong doesn’t help you in the water,” said Hackett. He also gave out Olympic pins at the end of the clinic, something that resonates well with the children being that this year’s summer Olympics could be the first that they remember watching.

Hackett, a Katonah resident, has been involved with Swim Across America in the past and says he really loves the foundation, the cause, and the environment of these events. Something he says he particularly liked about Chappaqua’s event was all of the young children who showed up. “I like to give the younger kids a good impression about being a successful swimmer and making it to the Olympics–if I can do it, anyone can do it,” said Hackett, a Yonkers native. It was certainly a family-friendly day; the lanes at Chappaqua Swim & Tennis Club were filled with smiling children, many with their parents and grandparents. Some were affiliated with the Chappaqua Swim Team, including Dan Levy, who has coached the team since 1999 and has a strong personal connection with the foundation. “This gives me a good feeling, because I started the team for my sister Karen, and then for the former Board President’s husband David Simon who passed a year later,” said Levy. “The children are learning that swimming isn’t just for racing and getting ribbons; it can also give back to the community.” The previously mentioned former Board President is Judy Simon, who helped organize the event. Her son Henry, 18, participated in Swim Across America in the past (he could not swim this year due to a back injury.)

“For Henry, it’s a way of fighting back against the disease that took his father,” said Simon. “Most people here have been touched by cancer, and although the smaller children didn’t know my husband, they do know my children and they know they are supporting a great cause.”

Twelve-year-old Chappaqua swim team member Gaige Elms swam a mile this year at her Swim Across America debut. She says she connected to it even more than she thought she would. “It may sound cheesy, but I got this warm feeling while I was raising money for the event, and I want to do even more next year,” she said.

Bobbie Pearce, 13, also weighed in on the event. “I personally don’t know anybody with cancer, and I feel like I am very lucky to have everyone in my family happy and healthy,” she said. “I want to help people who are not as fortunate as I am.”

From elementary school aged children to an Olympic medalist, this event was a light and fun way for attendees to help fight against the harsh realities of cancer. A common motive of every participant was the desire to help stop cancer in its tracks. 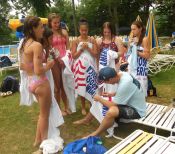 Gina Faustini is entering her junior year at Quinnipiac University. She is majoring in Media Studies, and is working with Ruby Media Group for the summer.