2017 marks the 100th anniversary of women’s suffrage in New York State.  NYS awarded this right to women three years before the 19th Amendment expanded it nationwide.

In honor of this significant anniversary, the New Castle Historical Society (NCHS) is hosting “A Party in Greeley’s Garden: Celebrating 100 Years of Women’s Suffrage in NYS,” on Friday, September 15, 2017.  All proceeds from the event support the NCHS; and a portion of these funds will be used toward the creation of a special exhibition exploring the Women’s Suffrage Movement and the life of Carrie Chapman Catt, a leading suffragist and a former Town of New Castle resident.

We would like to ask you to consider supporting this celebration in the form of an auction item, sponsorship, or contribution.  Any sponsorship or auction item (large or small), helps us to preserve and share local history.

As an independent, donor-supported non-profit organization, the NCHS relies entirely upon the generosity of private supporters like you to advance our mission. We are not an agency or department of the town or school district or any other government entity.  For more information,  contact Cassie Ward, 914 238-4666, director@NewCastleHS.org   Also, visit www.NewCastleHS.org

The Inside Press is proud to be Media Sponsor for this event. 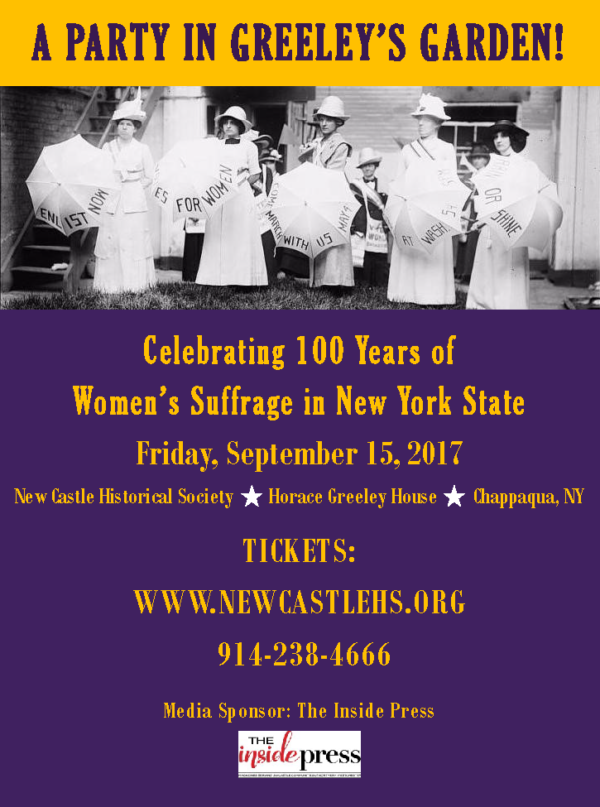